Why are we doing this to students?

Educators got into the profession because they like helping students, right?

I know that was one of the prime reasons I became an educator.  I have found a lot of joy and fulfillment in helping others learn new things.  I have always been boggled by people who went to school just to get a job. I always wanted to learn and to explore new things.  Being able to explore things no one had ever seen before has been a highlight of my life.

Teaching undergrads, I quickly discovered that the job at the end was the key reason most of them were in my class.  I even created an interactive survey to give my students a chance to think about other reasons to get an education.

Some people believe a variety of things, including that young people must:

Any of these mindsets could help alleviate the stresses that lead to cheating as a viable option for students to achieve their goals.  So why do we keep pushing the “get a job” narrative to people and reduce all these other views to unimportant?  The rich cross pollination of ideas and viewpoints is part of what rounds out a culture and we are now in an ecosystem that restricts other schools of thought.

My first degree was in Arts. I loved it and it set me upon the path my life has taken.  It did not, however, lead directly to a specific job.  Since I graduated many moons ago, people have historically started conversations with me about how useless Arts degrees are, being both a waste of time and money. I could not agree less with this concept.

Therefore, I have spent a great deal of time thinking about why we learn and why we get educated.  My standard response is that it taught me how to think differently.  Most people don’t like that because it does not fit into their narrative of a degree = job.  I have included this in my teaching and there are many reasons why people get an education and become lifelong learners. Getting a job is just one of those reasons.

The loops and whirls of experience

I recently had the opportunity to get involved in a group supporting a institution-wide initiative. I have spent most of my career doing this so it was nothing novel to me. What was novel was how I was able to draw on something I had done decades ago and another lifetime ago.

We were working on Institutional Learning Outcomes, and how they interacted with Program learning Outcomes, and Course Learning Outcomes.  I firmly believe that this relationship is vital and necessary.  Allowing everyone to do whatever they want rather than having a big picture plan rarely works in the long run.  It is like the difference between the Marvel Cinematic Universe and whatever DC Comics is trying to do.  The difference is stark.  Letting everyone do what they want ends up in Shazam and Aquaman being my two favourite movies from that studio.  So developing a clear view of the ILO / PLO / CLO really matters to me.

The cool part for me is how I worked on Graduate Attributes so long ago and was able to use that experience to be able to jump in and be a capable part of the group right away.  The image above highlights how we often think about life and the reality part of the image was front and centre in my thinking as I joined this new group.

New experiences can be so great and I am glad that my previous experience could aid me moving forward.

Do sailboats count as educational technology?

I recently read an interesting article about why children should learn to sail. I am biased in this regard as I love sailing and teaching.

Many of the reasons given coincided with how I try to design learning in class and online. Balance, Work Ethic, Bonding, Systems, and Adventure are great ways to deconstruct what we do and why we do it.

It has given me much to think about and stoked my desire to get back on the water.

5 Reasons Why All Kids Should Sail

The soft borders of EdTech

I have spent a long time struggling with the Bourdieuian concept of soft borders. Some disciplines have hard borders, like Engineering, Physics, & Medicine. People try to break the barriers down and claim to be members of these groups, but the discipline does not allow it.

Education has soft borders. We let anyone in. Basically anyone can claim to be a teacher and we are okay with it. I guess it is the mindset of most educators that we want to help people learn, so everyone is welcome. This drives me nuts but I have learned to deal with it most of the time.

I recently had a bizarre Twitter interaction with an American EdTech self appointed guru. She claimed that technology companies were ed-tech people and she did not appreciate my definition that the “Ed” in Edtech was education so education needed to come first in order to claim to be ed-tech people.

A frantic scramble of capitalist and nationalistic spin began and I was fascinated to watch it unfold. The apparently polished strategy to engage the tech companies to support her and rally her supporters for some fight was something I have seen from afar in the political spectrum. I had never seen it happen near me personally.

Providing facts and info like the focus on education rather than on financial gain ( like https://www.aaup.org/sites/default/files/Primer_on_Privatization%20%281%29.pdf) did nothing to deter the zealotous behaviours I was witnessing. They certainly did not convince me that the “Tech” in EdTech was as important as the “Ed”.

Learning about The Great Wave off Kanagawa 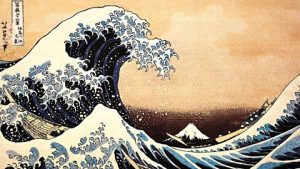 I read a fascinating article about a picture I have always been drawn to and even bought a copy of. I am not a person who buys a lot of art or reproductions. I think that I have unique taste and style (as people have told me often in the past). Eclectic nautical farmhouse is how I define my personal style.

However unique I like to think I am, I have a 3D, moving version of the Great Wave off Kanagawa hanging in my workshop alongside licence plates, memorabilia, and other non-pop culture decorations that I enjoy as I work on my soul restoring projects.

Learning the history and the reach of this image has shown me how much more about world history and culture that I still want to learn.  It warmed my heart to learn that Hokusai felt he did not do anything of consequence before he was 50.  So I still have a chance!

If more people looked at this diagram, I bet it would greatly reduce the amount of Dunning Kruger Effect zealots out in the world. 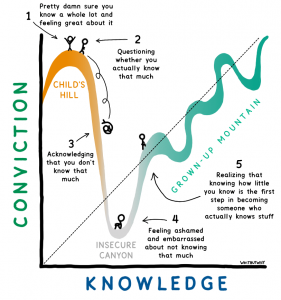 An interesting take on learning

With this first post, I am going to step out of my normal processes. I am going to refer to a tweet, but a positive one, not a nasty one. This is an interesting image regarding how learning can often occur and how people get in their own way as they learn new things.

The path of a maturing thinker. In order to get to Grown-Up Mountain and start real learning, you have to brave the cold winds of Insecure Canyon. If you're not willing to say "I don't know" for a while, you might spend your whole life on Child’s Hill. pic.twitter.com/8YT6emJcB3

Hello people across the Aether!

Welcome to TRUBOX Sites. This is my first post on this new blog. I hope someone other than me finds this useful.

Theme by Anders Noren — Up ↑